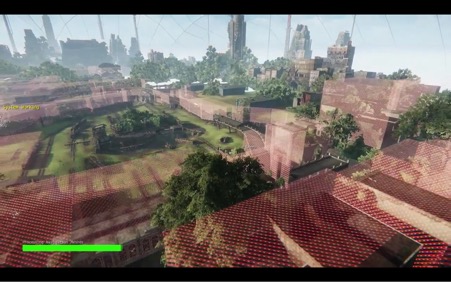 Abstract. This paper analyses vertical vision by tracing its possible genealogy and exploring the forms it takes in the contemporary city. In the first section, vertical vision is situated in the context of its cosmographic tenets. In the second section, the critique of verticality is complemented by a topological approach where vertical vision can be seen folding into a novel visual grammar. The lineaments of this grammar can be retrieved by attending specifically to algorithms and their role in contemporary urban perception, which we discuss in the third section. The fourth section implements the suggestions of two artists: Harun Farocki’s notion of navigation, and Hito Steyerl’s notion of bubble vision. Exposing the central role played by digital platforms in ushering in this novel paradigm, bubble vision can be reconstructed as the logical end-point of classical vertical vision. This comes in conjunction with the rise of peculiar visual-cultural configuration, which could be called ‘atmoculture’. Section five submits that atmoculture represents the cultural milieu of bubble vision. In conclusion, the paper invites visual scholars interested in the study of verticality to recognise bubble vision, together with its atmocultural background, as a new expression, and a reconfiguration, of vertical vision: similarly centred and disembodied, exhilarating, and dangerously de-responsibilising.